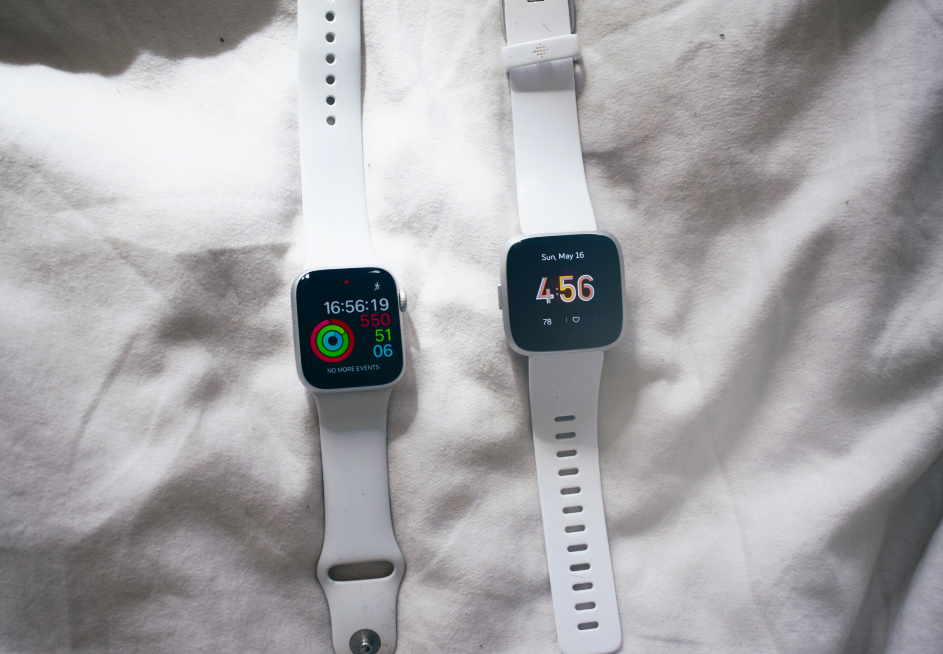 *In all photos including screenshots below, the Apple Watch is shown on the LHS and Fitbit on the RHS

If you don’t already know – I’m really into my health & fitness. I started my “journey” back in 2017 and initially it was driven purely by wanting to lose weight and also wanting to feel less sluggish; I was eating really badly (I’m talking chicken katsu curry “brunches” every Saturday…), exercising half heartedly once a fortnight if that, drowning in BBQ pork ribs and it all caught up with me when I realised I was no longer able to fit into my grad dress, a year after graduation. A lot of the unhealthy habits were brought on by the stresses of my first full-time job – a late night or a bad day had to be met with the reward of fast food… right?

Previously, I had never been into fitness. At least – not for the right reasons. Before a summer holiday I’d overload on treadmill runs to get the o so coveted “bikini body”, and every now and again I’d do a really unhealthy crash diet to drop lbs really quickly (I’m talking a tub of yoghurt for lunch!) It was so bad – but I was young, and I just didn’t care. Obviously it was unsustainable, so after any summer holiday, I’d fall back into old habits. To be honest, in 2017, I was ready to do the same thing i.e. a crash diet to drop the lbs super quickly. However, it wasn’t conducive to 12 hour work days, so I decided to start exercising properly.

I started with home based pilates workouts, then I won 10 free spinning lessons in a raffle, and well… then I discovered fitness influencers on Instagram. I was swept into the world of weight lifting, and I absolutely loved it. I started going to the gym consistently in Dec-17, and >3 years later, I’m still absolutely loving it.

As I’ve come along on my health and fitness journey, I’ve also come to love collecting and analysing health data. I had a Fitbit gifted to me from a friend back in 2018, and I was instantly addicted. I loved tracking my resting heartrate, cardio fitness levels and following how these metrics developed over time; I found it so interesting looking up my sleep data, the watch motivated me to hit 10k steps a day (pre-covid), and seeing how many calories I could burn in a gym session was basically my mental pre-workout. I am so into a good ol’ smart watch now, that a “fashionable” watch is totally out of my radar.

Alright – that was a beefy enough intro. Time to measure the two up.

I thought I would start with the reason I left Fitbit in the first place. My first Fitbit was a Blaze, which was discontinued in place of the now popular Versa, and it did me very well for 2 years. However, once we got to the 2 year mark, it just completely stopped tracking my heartrate. Which means my sleep data became meh, and I couldn’t accurately track the intensity of my workouts. I’ll give it to to Fitbit – their costumer service is A1 – so although I was out of the warranty period, they offered me a few discounted watches and one of those was the Fitbit Versa Lite. However, whilst I was researching how to get my Fitbit heartrate sensor working again for the Blaze, I did find tons and tons and tons of complaints about this exact issue so it did make me very wary. Indeed, my wariness was justified, as my shiny new Versa Lite lasted less than a year before the heart rate sensor stopped working, and the synch with my phone was also a bit of a bitch. I decided it made more sense to fork out some extra money on a hopefully better quality Apple Watch, than to continue to replace Fitbits for £100 at a time twice a year. I’ve only had my Apple Watch for a few weeks, so can’t really comment on its longevity, however for the price – I sure hope I don’t run into the same issues. 🙂

The “look” of these watches is near identical, in fact my boyfriend said he can’t even tell them apart. Currently, I’m much more loving my Apple Watch due to the smaller watch face, it also feels a lot lighter on my wrist; that said, there are such a range of different types/styles of Fitbits (vs. the Apple Watch) that you’re bound to find one that suits your style. With both of these watches, you can easily switch different coloured straps in and out. Currently, I’m loving white straps. 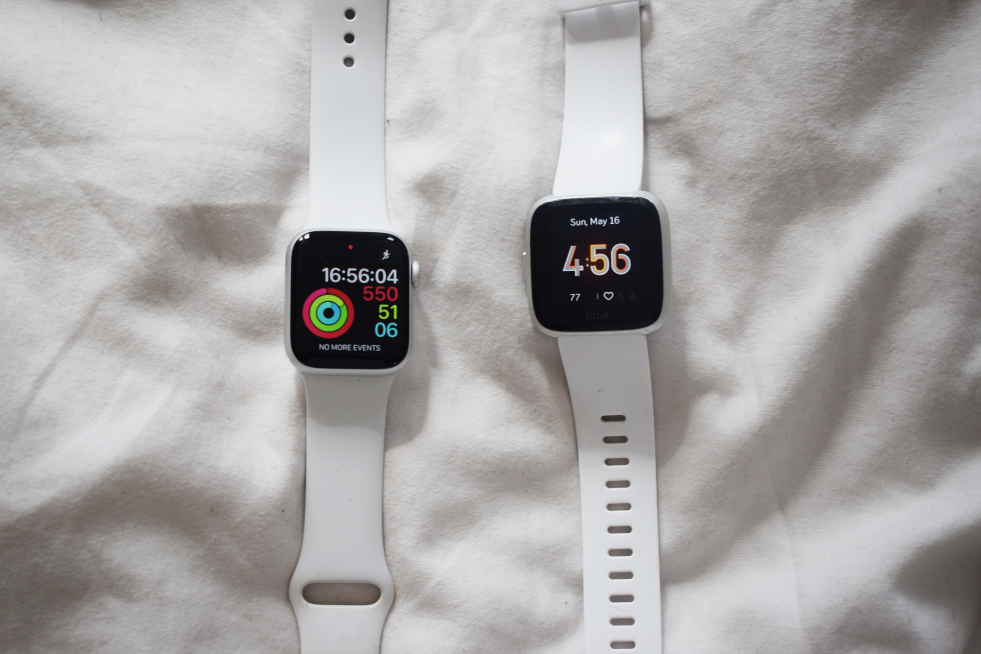 Tracking my sleep is one of my favourite things. It must be a phycological thing to like waking up and seeing if I hit my 7h goal or not. On this factor – Fitbit wins hands down. They give very granular sleep data down to your REM/Light/Deep sleep split, they also grade the quality of your sleep, and my favourite feature – they integrate any naps you have into your total sleep time for the day (and I am a big napper). In contrast, the Apple Watch does not give you any granular data, aside from literally just telling you how many hours you slept for. I’m surprised the sleep data is so mundane for Apple’s standards, so for this one – Fitbit definitely takes the crown. 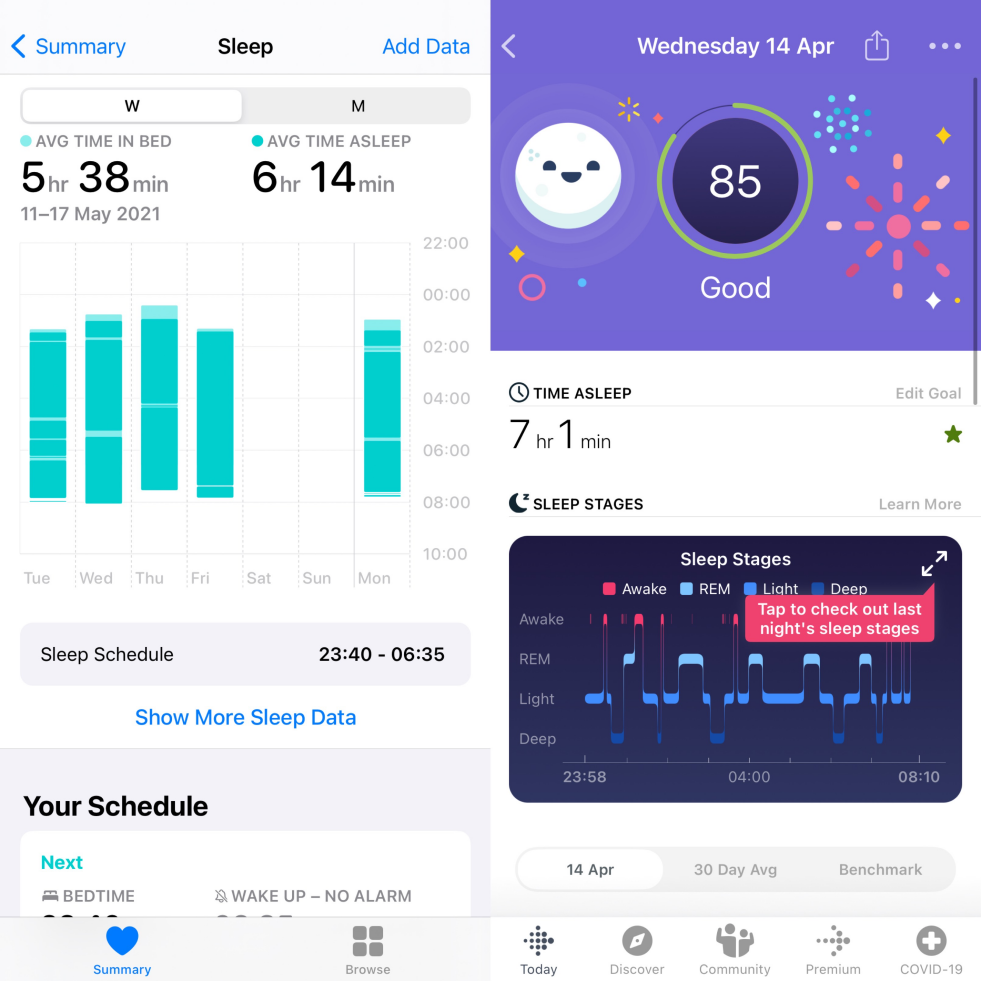 When it comes to tracking a workout, the total calories burned/heart rate is very much in line for both watches which is good. However, there are a few ways that Apple trumps here. First of all, they have a much bigger library of workouts for you to choose from, whereas Fitbit tends to have a more basic selection. Arguably this doesn’t truly matter – a workout is a workout – but when I look back on my workouts I find it interesting to see what exactly I did that day. Upon completing your workout, the Apple Watch will also let you know your active calories burned and total calories burned (total = active + calories you burn by just… existing), as well as showing you your heartrate recovery throughout your workout. The Fitbit workout data is somewhat more basic, but still sufficient. For this category – the Apple Watch comes out on top. 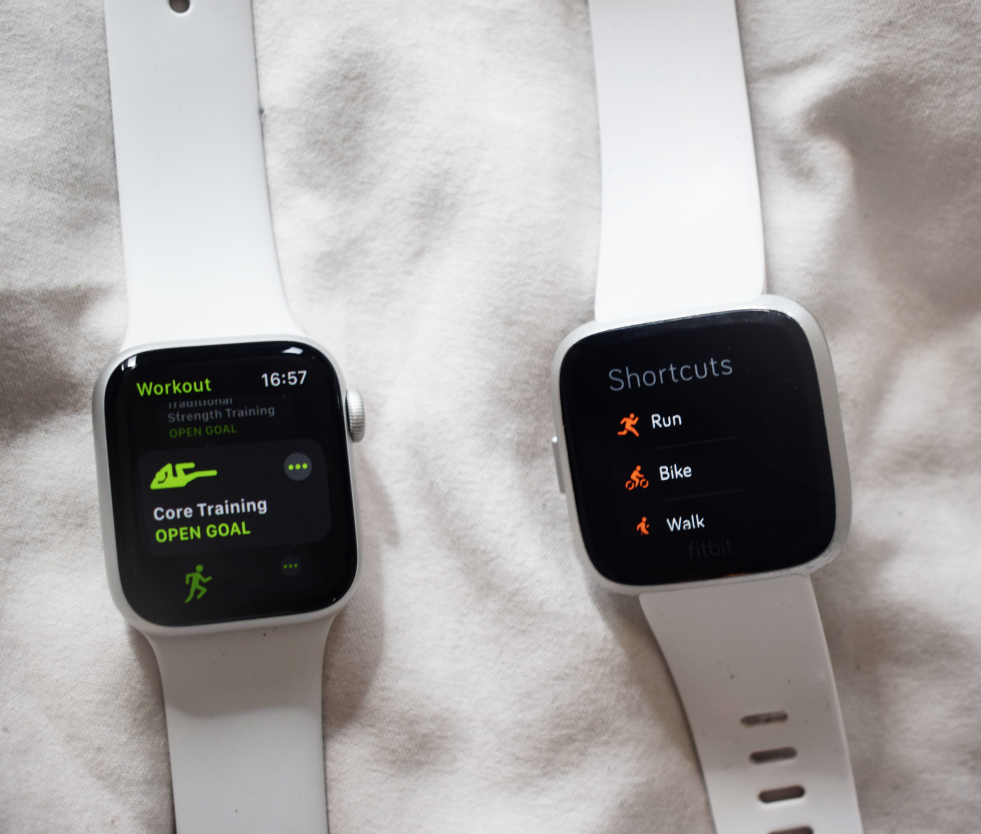 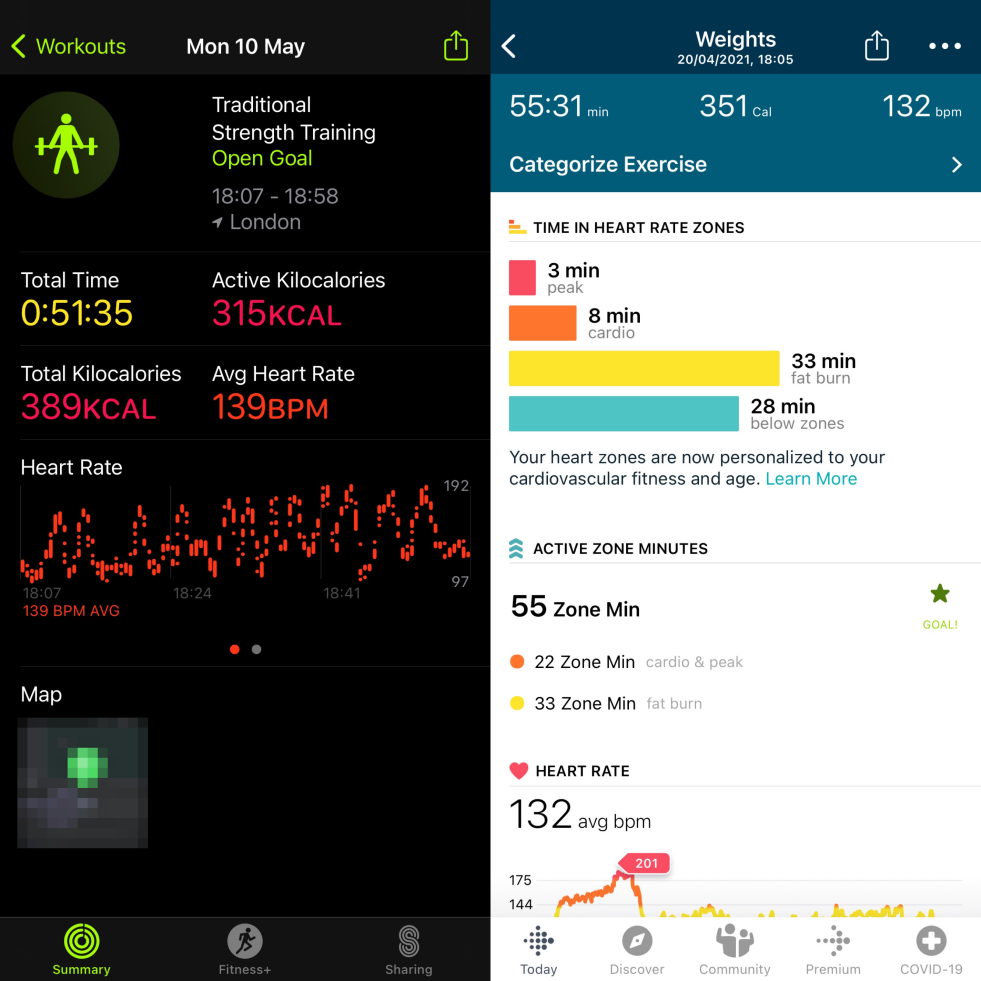 I could wear my Fitbit for several days without needing to charge it, and to be honest I often then got lazy with my charging and would end up draining my Fitbit to zero, which I would guess is one of the reasons it kept breaking (although – that shouldn’t be the case). On the flip side, the Apple watch is holding so much more data (as it is an overall smart watch as well as being a fitness watch), so it ends up needing to be charged once a day at the minimum. I tend to charge my Apple watch (i) when I shower and (ii) for 10-15 minutes before bed. Once you get into the rhythm of it, it becomes second nature, so I have yet to completely drain this one. Overall, Fitbit is the taker here.

Aside from steps, workout data and sleep data, the Fitbit tracks the hours where you have moved, your weight (you can automatically connect it to one of Fitbits scales to get the data linking more seamlessly), you can easily add in glasses of water drank and you can even practice meditation and log your period cycle.

However, the Apple Watch does all of the above and then some. You can enter your blood pressure, it gives you a split of resting and active energy, you can link your Medical ID in the case of an emergency, you can track your cycle, water (albeit not as seamlessly as with via Fitbit), set up irregular heart rhythm notifications, track your weight, log any symptoms you have, get data on your mobility, practice mindfulness, and 1 million other things. You can adjust your dashboard to display the information that you care about. The Apple Watch even has a great feature (for older people) whereby it can track when you fall if you stay down for a long time – I think this is so useful for older people who live alone where accidents like this can have really terrible endings. The question with Apple Watch is – do you really need all of this data? I must say, half of it I don’t even use or have on my dashboard. A lot of the information I care about is the information I was getting for my Fitbit and that is why for so long, I found it hard to justify the Apple Watch purchase. If it wasn’t for the fact that my Fitbits kept breaking, the information there was otherwise pretty sufficient for me. Still, I’ll give this one to Apple. 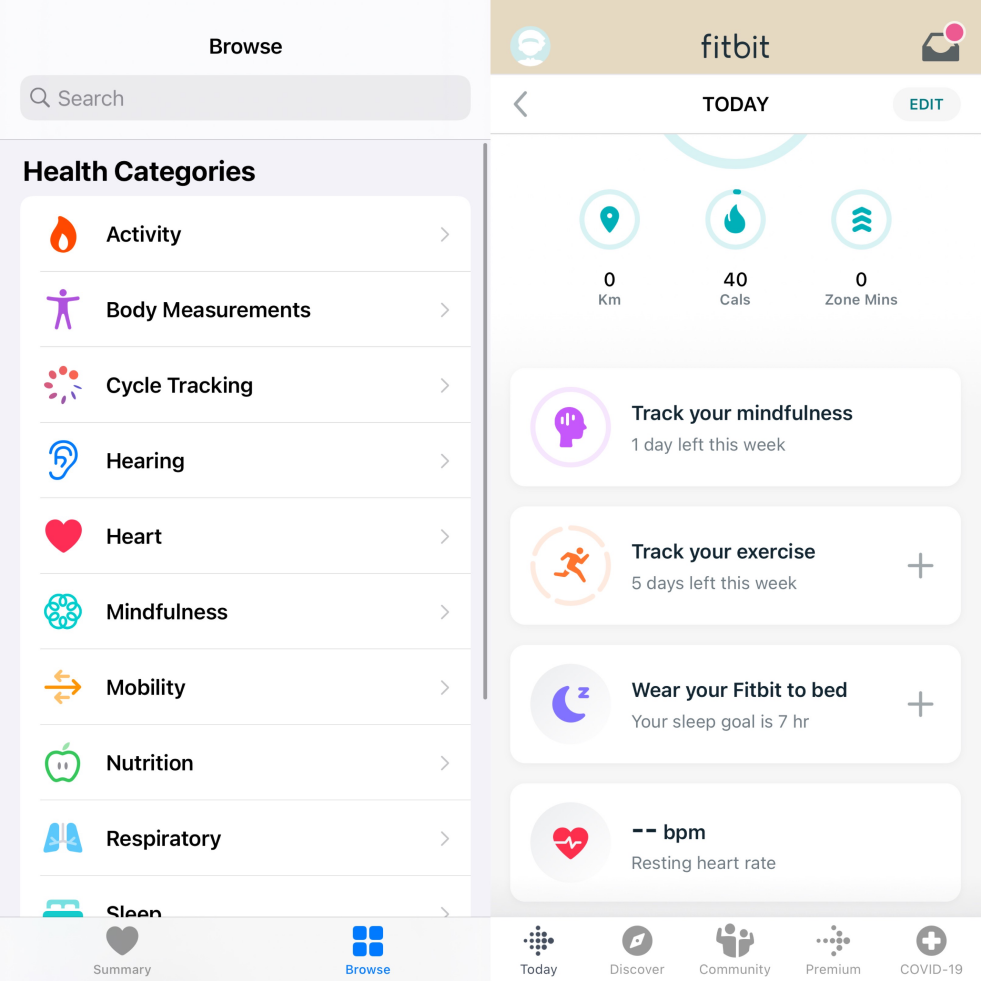 So, what’s the verdict?

Overall – I am absolutely loving my Apple Watch and don’t regret buying it at all. But I am a big smart watch lover, so the pure intrigue I have with all of the data makes the cost so worthwhile to me, whilst for many, it’ll be totally pointless.

Thus – I give my very diplomatic and balanced view: If you’re starting out with a smart watch, get the Fitbit and see how much you like it. I don’t see the point of jumping straight to the expensive Apple Watch model when you might be so underwhelmed by the data that the watch ends up on your side table uncharged for days on end. If you are a seasoned smart watch user, and are looking for more granular data and something that links so seamlessly with the data on your phone, then certainly upgrade to the Apple Watch. An Apple Watch SE (their “budget” version) is probably sufficient if you’re not looking for some of the real medical data, however, if you’re comfortable splashing a little extra cash, then definitely treat yourself to the Series 6!

Learnings from my first (terrible) job

My favourite blog posts of 2021