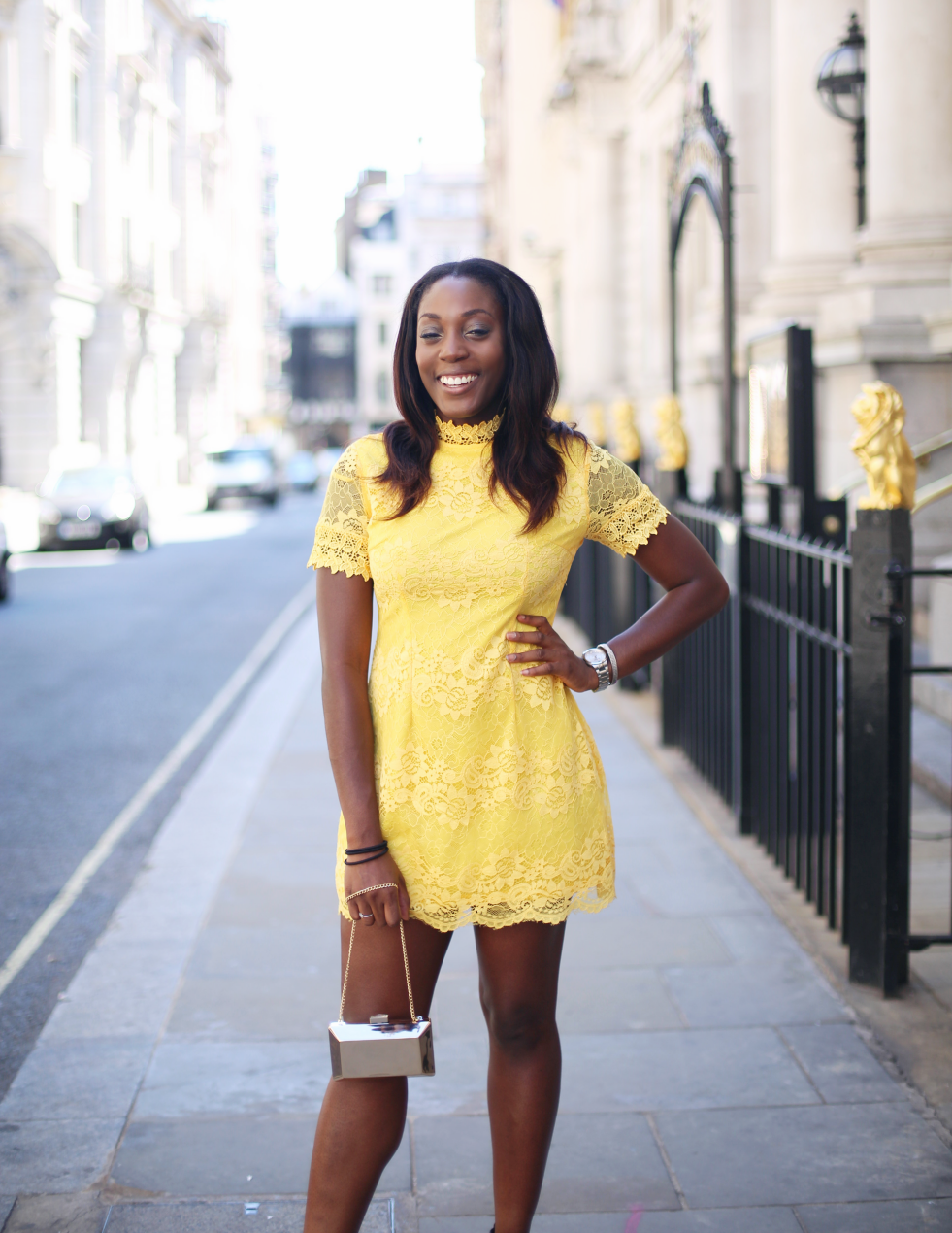 “Nobody keeps it real like your parents. They compliment you behind your back and talk sh*t to your face.”

It’s definitely within British culture to be overly polite. I can be thinking “what the #$@&%*!” in my head but what will actually come out of my mouth will be “oh, it seems there has been a misunderstanding/miscommunication.” The one set of people you can actually count on in this world to “say it as it is” are typically your very own – your parents.

When I graduated university, my parents helped me get all moved into the current flat I’m in now. Once all my bags had been put in my room, and my parents had gotten out all their proud speeches about how it’s important to work hard, my mum told me it was time to switch up my style – “enough of this crop top and skirt thing, you’re a working girl now.” It was brash and to the point, as parents are, but – it was true. Since I had started university three years prior, I had spent near enough every day in a crop top, skirt, tights and chelsea boots. It got to the point where I went through a period of not even owning any useable jeans or trousers, because I spent my life in skater skirts and tights. Now – there isn’t anything necessarily wrong with this. However, every day crop tops and skirts are definitely a “younger” look, and well, I was a big girl now – financial independent, moving out for real, for real, and getting geared up to spend most of my time sat at a desk. I was growing up, and my style had to grow up too.

Both is good but I see your style has glown up ??

In university, I spent most of my time chilling in my overdraft. Seeing negative numbers was a norm for me and I relied on student finance as my quarterly pay check to get me back out of the water. During the summers, I’d do internships to help sustain me and towards the end of university, I started earning a little more cash from my blog too. That said, none of this money was really in abundance enough to ever really help enough when it came to updating my wardrobe; sure, I’d buy some bits here and there usually from H&M and New Look but a lot of what I wore, I wore consistently for the three years. There’s nothing wrong with that (better than hoarding and/or being wasteful), but the issue was that I even if I had wanted to upgrade my wardrobe, I didn’t have the funds to.

Finally, in 2016, with a monthly pay check under my belt, I started taking the first few steps to make this changes (I still have all of my old clothes in two huge suitcases – I want to give these away soon or sell them on Depop… it’s a lot). At first I would use some of my monthly pay every single month to buy some new items, but over time I realised 1) it was excessive and 2) I couldn’t really be bothered. Now I just by bits and bobs when I need them (for e.g. I did a big shop recently for my holiday to Greece).

I invested into some classic pieces
I’ve spoke a lot in the past about investing some extra pennies into some good, quality pieces. There are some items I don’t mind dropping an extra dime on – for example a nice bag, a good quality coat, a watch, some durable jewellery and the list goes on. If I’m feeling extra fancy and I come across something I like I’ve also in the past spent some money on nice designer purses, belts and scarves. It really just depends on what I come across and how I’m feeling at the time (for e.g. at the moment, I’m not too interested in buying any new designer pieces but perhaps come December I’ll want to treat myself). Anyhow – although I like to invest in some pieces which are of a better quality and that I like, I also mix this up with cheaper, stylish, everyday pieces. For e.g. a skirt, a crop or a day dress. My favourite places to shop when I just want to shop trendy are Zara, ASOS and Missguided. I’ll also occasionally pop into Topshop – but the former are definitely my super go-tos. 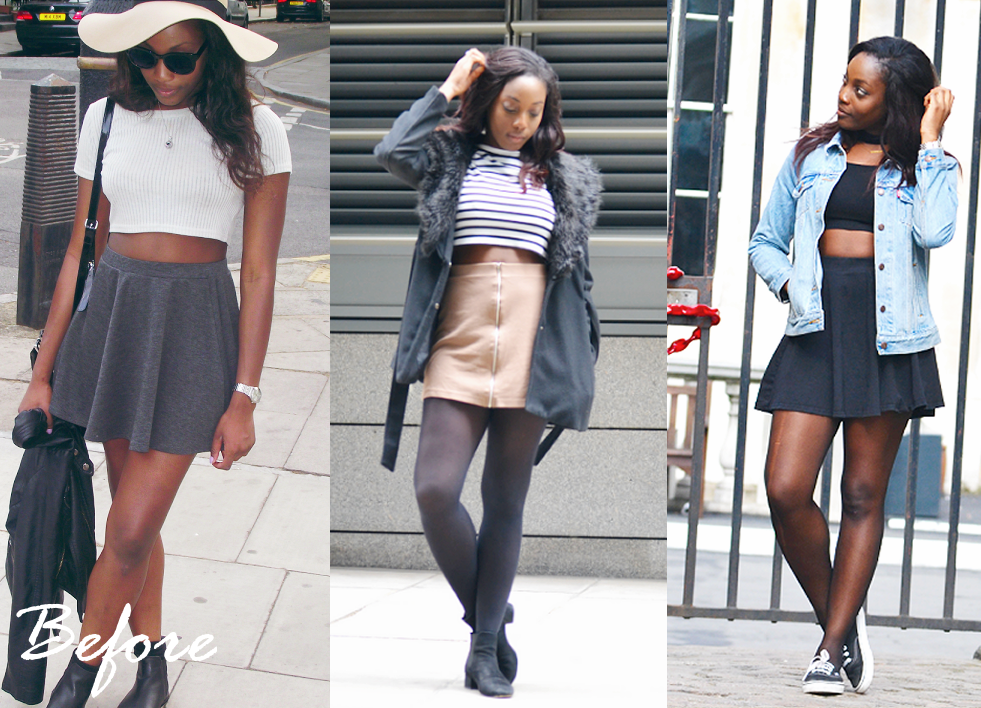 I became more comfortable with covering up less
I’m really not a very promiscuous dresser and I was never really raised to be. Even if I was wearing a top with the tiniest of “V”s my mum would have me put a vest underneath up until I was even 18 years old. “Boob tubes” and off the shoulder pieces were never really an option and even a backless dress would call for some discussion. I remember the first time in university I wore a slightly lower down top and my friend was absolutely shocked as she said that was so out of character for me, that’s when it hit me that my style was to cover up and cover up well. I’m still mostly like this to be fair, not many of my clothes are too revealing and if I’m revealing anything, it’s typically just my legs. However, once I started working and really just feeling and embodying being a grown ass woman, I realised that if I so wanted to wear a top that happened to be more revealing, then quite frankly I could do what I want. So whilst it’s not the most regular occurance, I do wear items more often now that may be slightly more revealing and it’s something I’ve gotten more comfortable with. It’s not necessarily that I am ever revealing my entire body (for example perhaps I’ll pair a lower down top with a maxi skirt to balance the two), but I’m also not always feeling compelled to be in turtle necks and vests anymore.

Jeans made a comeback!
It’s so weird that jeans managed to totally drop out of my wardrobe for some time as they seem to me to be one of the most staple pieces you could ever have. When my mum was telling me I was indeed due a style upgrade one thing she mentioned was jeans and re-stocking them back into my wardrobe – so that I did. The great thing now is that I have options depending on how I’m feeling – there are days I want to wear jeans, trainers and a huge bomber and there are days I feel super girly and do want to revert back to my crops and skirts. Sometimes, I combine the two and dress up jeans in a way that still is what I consider to be quite feminine, which I think embodies how I dress for the most part. The key is that I have options to dress as I feel on any given day – which I didn’t have before, wearing the same style every day. 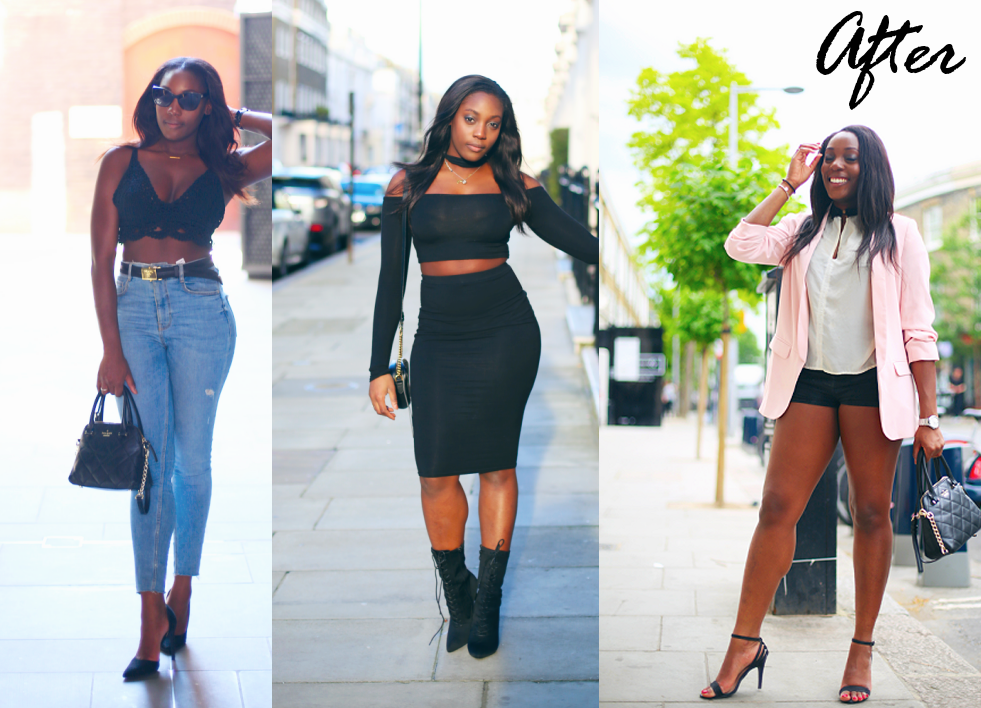 I minimalised my jewellery
I was once that girl that wore 100 pieces of jewellery at the same time. When I first started uni maybe up until the start of my second year, I’d typically wear at least a few rings at one time, some bangles, and some necklaces. However, I was buying really cheap jewellery at the time (I’m talking 10 rings for £10) and I eventually became so tired about everything turning rusty or green after a few weeks that I stopped wearing jewellery all together. Over time, I reintroduced jewellery back into my life but I decided to focus on higher quality pieces, and just a few pieces at that. These days, I wear the same ring (a gift from a friend from Pandora) every single day – I have been wearing this same ring every single day (even in the shower) for a good 1.5 years now and it has never given up on me. Similarly, I wear the same Michael Kors necklace on a daily basis (from Levi for our 1 year anniversary), and even however many years on, it has still maintained its quality. Depending on my outfit, I’ll switch up to a silver necklace that my mum bought me a few years back. I’ll wear one watch and one bracelet with all of this, some stud earrings (or more dressy earrings if it’s a big event), and honestly, I just keep it at this. It’s so much easier and the key is that things actually last – £10 x 10 rings does sound like a great deal at the time but if the ring is going to give up after 2 weeks, you might as well fork out some extra dollar on a nice piece from Pandora or Swarovski and trust that these will go the distance and last many more years.

My philosophy…
My style is something I am always constantly evolving, too – I used to spend all of my time when I was younger worrying about the latest trends and trying to get dupes of everything on the runway, but these days I just sort of go about my life and do what suits me and what matches well with how I feel at that time. For e.g. I never really thought bombers were nice pieces, but over Christmas I saw a keeper in the men’s section at Zara and it quickly became a winter staple. I am also continually learning – a few months back I forked over a larger sum of $$ on some designer shoes for daily use to work, I found that whenever I bought shoes from say Office they’d get all battered very quickly so I reckoned the large sum of money must really do a lot in terms of quality. Soon after that I learned it totally wasn’t worth it – shoes are due to get battered, especially if you use them on a daily basis, which is why I’ve switched now to a £25 pair from Zara which I’m sure will have the same longevity as the shoes 6x its price! You live and you learn.

PS. I hope you enjoyed the before and afters!

How has your style changed over the past few years?
Previous Article

Blogging Behind the Scenes: The Stuff You Don’t See